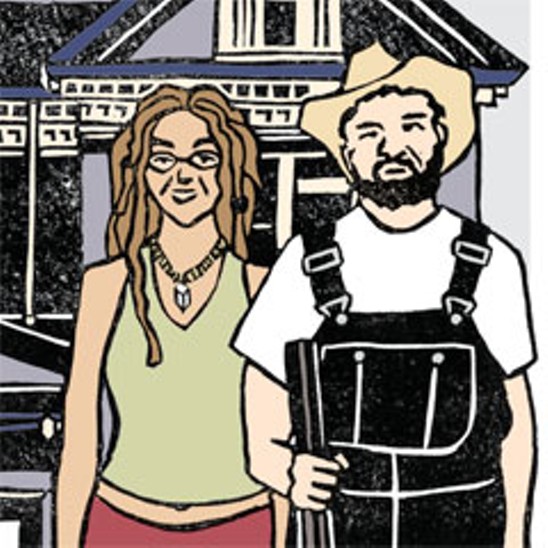 In order to work in solidarity with Indigenous people of the Klamath River, we must take a stand against settler-imposed violence, and currently a major form of violence against Native People comes in the form of gentrification and ecological devastation due to the cannabis industry.

This is a difficult and complex issue facing our community, and we recognize that there is no miracle cure to the problem.

The pot economy primarily benefits settlers, and by raising property and rent costs, it is harder for Native People to keep their homes. The runoff of water from pot farms contributes to the already dangerously high levels of toxic algae in the watershed(1). The commercial cultivation of cannabis also consumes appalling amounts of water, destroying habitat of native food sources such as salmon(2). Irrigation is one of the larger issues facing the health of this watershed. The importation of soil, amendments and laborers for grow operations has been linked to the rapid spread of sudden oak death, which is killing tanoak oak trees, another culturally significant food source(3). The use of pesticides (herbicides, rodenticides, insecticides, fungicides) by some growers unleashes unknown quantities of hazardous toxic chemicals into the water air and soil. These are only a few of the many damaging impacts of this industry. We have no way to predict the longer-term implications of the damage imposed on the landscape by weed farmers, but the signs aren’t looking good.

It is not lost on us the hypocrisy of our statements. As a group, most of us have benefited in some way or another from the weed economy, and continue to do so. We don’t have any right to point fingers and cast blame towards each other when we are benefiting from the same system. The reality is that any one of us can find an example of someone doing a “worse” job than ourselves personally, but doing that doesn’t fix the problem. We must examine ourselves and ask “How am I a part of the problem and what can I do to fix that?” We hold a collective responsibility as settlers to hold ourselves/each other accountable for these injustices. We must phase out of the cannabis industry, as well as industrial capitalism/agriculture in general, and nobody can do that alone, we all need to work together.

When faced with these truths, settlers will often try to avoid taking responsibility by saying “Natives grow weed too”. This is true: some Native people do grow pot. However, this does not lessen from the overall destructiveness of the pot industry and pot growing. Some Native people have also participated in other destructive economies, including logging and mining. For one, Native people are not monolithic and like all people, have a wide diversity of perspectives and values. More Importantly, however, the contexts of Native people and settlers participating in boom to bust exploitative economies that have come to the region is different and must be considered differently. The War on drugs has been disproportionately targeting people of color, making the risk far less for white settlers. New economies imposed by settlers that require environmental exploitation put enormous pressure on Native people to adapt in order to feed their children and survive. We believe that Indigenous survival in native homelands by any means necessary amidst the invasion that seeks to eradicate Indigenous people is an act of resistance in itself. That being said, most of the resistance to logging, mining and the weed industry has originated from Indigenous voices, and those voices need to be centered now to face environmental issues. Native people are the creators of the only truly sustainable way of life that has ever existed in this region, a way of life that lasted for eons, rather than a single generation.

What was started with the intention of supporting an escape from the greater capitalistic society, has become another aspect of its resource extraction, impoverishing the disadvantaged to the benefit the privileged. Like the timber and mining industries before it, the marijuana economy has begun to eat its own tail. Its inability to stay within sustainable limits, or respect the landbase it exploits has become obvious. It is time to open ourselves to truly learn from the Indigenous people of this region, rather than simply paying lip service to doing so.

There are so many questions, and so many potential outcomes. How are we going to build a future where everybody is treated with dignity, respect and given an real opportunity to live a healthy life. How do our personal aspirations of financial gain stand in the way of that future? What do we need to let go of in order to create a healthier future for everyone? Now that we understand more of the consequences of cannabis farming, we are at a crossroads with the process of legalization and compliance, are you disentangling and phasing out the pot industry? Or are your aspirations for financial gain going to get in the way of taking responsibility for your actions?